1 ДЕНАР in the lower central field Stylized horizon with a 16-ray sun. 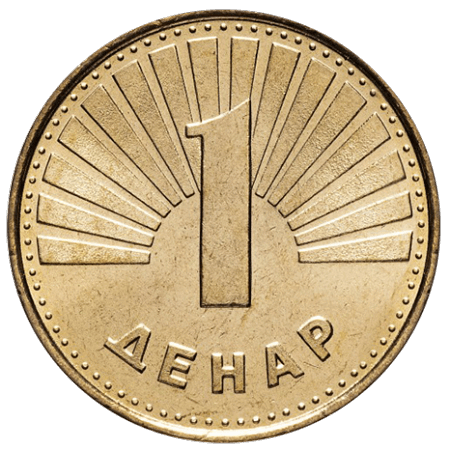 2 ДЕНАРИ in the lower central field. Stylized horizon with a 16-ray sun. 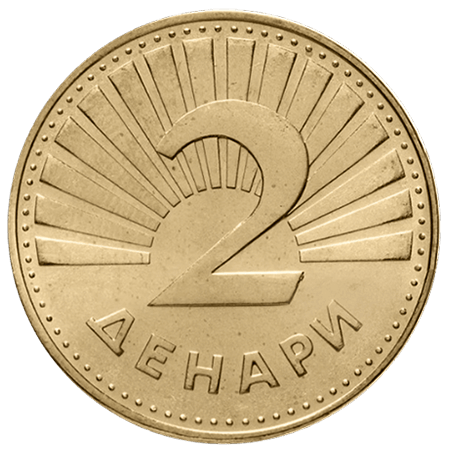 5 ДЕНАРИ in the lower central field Stylized horizon with a 16-ray sun. 10 ДЕНАРИ in the lower central field. Stylized horizon with a 16-ray sun. 50 ДЕНАРИ in the lower central field. Stylized horizon with a 16-ray sun. 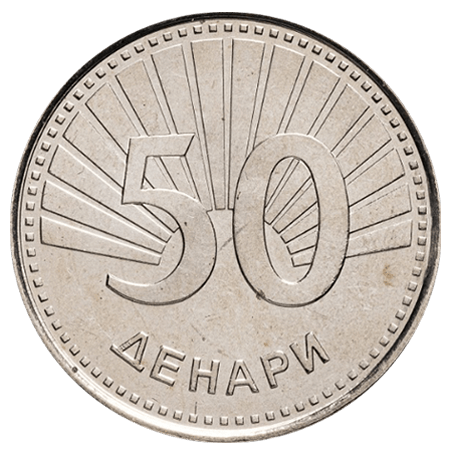 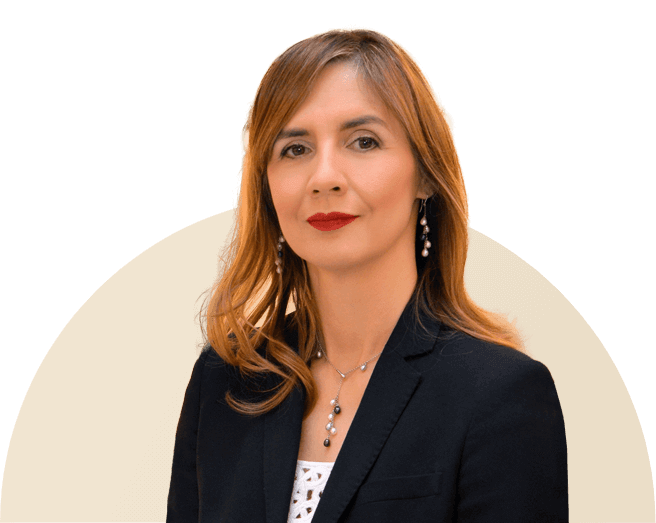 Note by the Governor of the National Bank:

This month we celebrate an important jubilee, a monument to the building of our country. 30 years ago, under the auspices of the Commission for Monetary Independence, our national currency - the denar was introduced. At the same time, the institutional framework of the monetary system was established - the National Bank started functioning as an independent central bank.

Although a relatively young central bank, in the past 30 years, the National Bank has faced a number of challenges, to which it has successfully responded. The first years of monetary independence are a period of hyperinflation, recession, insufficient level of foreign exchange reserves, permanent depreciation of the domestic currency and general macroeconomic instability.

In response, in October 1995, the monetary strategy of a stable exchange rate of the denar against the German mark was introduced, while since January 2002, the exchange rate of the denar has been pegged to the euro. For the fixed exchange rate strategy then and now, there is a consensus that it is one of the key pillars of the stability of the Macedonian economy. Over the years, despite many hardships, we have maintained the stability that has been given to us by mandate.

Denar stability and financial stability were also preserved in the onset of the worst economic crisis caused by the covid-19 virus pandemic. The National Bank was one of the pillars that maintained the stability of the entire economic system, achieving its mandate goals, giving support to the economy through appropriate policies and measures. I would not be wrong to say that after this crisis, both the economy and the institutions that are part of the economic system have become stronger. The National Bank reaffirmed its commitment to maintaining the stability of the Denar and it will continue to be "the anchor of the stability of our economy". We continuously maintain the foreign exchange reserves at a comfortable level, guaranteeing with them the stability of the currency. The banking system is set on a fully market basis and it is stable, liquid and sufficiently capitalized, due to which it can provide credit support for economic activity. Regarding the framework for the operation of the banking system, we received significant recognition from the European Union, which put us on the list of only 26 other countries in the world, whose banking regulation and supervision meet European standards.

The victories won during the past 30 years, in the crises, but also in the periods of economic growth, certainly would not have been possible without the most valuable capital of the National Bank - human capital. Over the years, the central bank's efforts have always been aimed at recruiting quality staff, upgrading them and continuous learning throughout their institutional careers. I will not be immodest if I say that our staff sets standards for work, not only in the country, but also beyond, which over the years has been marked by numerous awards. Here, I would like to thank you for the strong support we have from the international financial institutions, which together with our commitment allows us to have a high quality core of professionals.

Anita Angelovska Bezhoska, Governor of the National Bank of the Republic of North Macedonia, opening speech

Panel I: Building resilient economies in the context of recurrent shocks

This session should highlight the main challenges of policy makers in the current momentum, surrounded by uncertainty arising from the post-pandemic policy adjustments and escalation of the geopolitical risks in East Europe. It seems that one crisis is replacing the previous one, although of different nature and different impacts. The distinguished panelists will discuss how to build more resilient economies and how to tackle vulnerabilities.

Panel II: Is the financial sector fit for SME needs? How to improve access to finance for SMEs in the region?

This panel will cover the views of the private sector and international institutions on sources of financing in the post-pandemic period, as a crucial pillar of the economic recovery. Improving access to finance for the SMEs in the SEE region is another issue to be discussed in this framework.

Dragan Tevdovski, Advisor to the Executive Director at the IMF,

End of the first Conference day

This panel should enlighten the financial stability issues in the post-pandemic “normal”, in view of the specifics of the pandemic crisis and its impact on banking and financial sector performances. The distinguished panelists will discuss the lessons from this crisis and eventual improvements in the regulation and monitoring tools in order to further strengthen the banking sector resilience.

The dynamic changes in the financial system as well as the new global challenges resulted in continuous inserting of new central banking tasks. Within this section, the status and progress in facing some of the new challenges are going to be discussed, including the issue of their interaction with the other central banks objectives. Setting the floor for cooperation with all relevant stakeholders in view of increasing financial inclusion, the speed of digitalization in the financial sector and green finance initiatives is important issue for a meaningful progress.

Chair: Nikola Popovski, Board member, National Bank of the Republic of North Macedonia

Borce Trenovski, Board member, National Bank of the Republic of North Macedonia/Faculty of Economics Skopje, Discussant

Closing of the Conference